The purpose of asking Sentence Correction questions in the exams is to test your grammar skills. You need to find out the grammatically incorrect part of the sentence and replace it with correct options. You can achieve the same by being aware of the fundamental rules of grammar and correct usage of words. Incase you are having trouble in Fundamental rules of Grammar, then you can watch these 4 videos in which our VARC Expert, Mr. Surya Pratap Singh has discussed about this topic in a much simpler manner which is easy to grasp.

The verb used in the sentence should be in accordance with the subject.

ii) In case the subject is a collective noun, the verb will take a singular form. Example:
– The class is making a noise.

There are four collective nouns – cattle, poultry, police and gentry, with these nouns we use a plural verb and there are exceptions to the rule.

iii) In case the subjects are connected by ‘AND’, they will take plural verbs. Example:
– Gold and Silver are precious metals.

v) All the sentences that begin with EACH, EVERYONE and ANYONE will have a singular verb. Example:
– Every one of the boys loves to ride.
– Anyone has a pen, please.

vi) Confusion between I and Me: When two subjects or objects are joined by AND, we often do not know which form to use. Example:
– Jenny and I/me joined the book club: Here Jenny and ‘I /me’ are the subjects of the verb ‘joined’. Hence, the subject pronoun ‘I’ is grammatically correct.
– Jill took Justin and I / me to the shop. Here Justin and ‘I / me’ are the objects of the verb ‘took’. Hence, the object pronoun ‘me’ is grammatically correct.

Note- Whenever a comparison is made using “than” or “as”, the objective form of pronoun is used.

vii) Usage of NEITHER…NOR and EITHER…OR: If both the subjects are singular, the verb will be singular. Example:
– Either the mother or the daughter has cooked the meal.

But when one of the subjects, joined by OR or NOR is plural, the verb must be plural and the subject should be placed near the verb. Example:
– Neither the teacher nor the students were present.

The different words/ phrases performing the same function should be used in the same format. Example:

An error to leave a participle without a subject. A modifier should be placed next to the subject it modifies. Example:

The comparisons made should be between two similar things. Example:

It refers to the error in choice of words/ phrases. Common pair of words and phrases where you may face diction error are:

b) Few and A few: Few is something negligible, hardly any while. A few is equivalent to some. Example:

c) Little and A little: They are used for quantity in the same manner as above. Example:

d) Lay and Lie: These words are used very differently.

The task is to identify the particular type of error/s. Look out for the Time Indicators (before, after, during, etc.). This can help to track the verb errors easily. In some cases, the whole sentence needs to be rewritten.

Sometimes, the answer choices are very similar and there is less difference between them which makes them difficult to choose. So read the full statement before choosing the answer. Also, if there are 2-3 similar answer choices, this does not mean that one of them is the correct choice. The totally dissimilar choice can be the correct one.

Do not jump at the initial answer choices to be correct even if they seem so. Go through all the choices first and then make the selection.

The underlined part may contain vital facts or hints to solve the question. Do not ignore them.

When you select an option, see that it fits with the rest of the sentence and it makes sense. If not, then substitute it with a better option.

It comes in handy when faced with multiple errors in a sentence and similar answer choices.

Directions for Questions: Select the correct option to replace the bold and italicized part of the sentence given in the questions.

The President of Costa Rica, along with two vice-presidents, are elected for a four-year term by the people.

Here, the answer will be option 3 as it uses the correct the subject-verb agreement rule that with “The President” the singular verb “is” will be used.

Previously thought to have been extinct, a team of biologists rediscovered the New Caledonia crested gecko in 1994.

The correct answer is option 5 as the modifier ‘extinct’ is used for the New Caledonia crested gecko and not the team of biologists.

To help you crack CAT-2021 with ease, we at Fundamakers is offering FREE Practise Sessions covering each and every topic related to Logical Reasoning & Data Interpretation (LRDI) , Quantitative Aptitude (QA) and Reading Comprehension & Verbal Ability (RCVA) 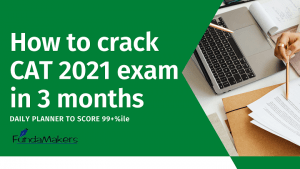 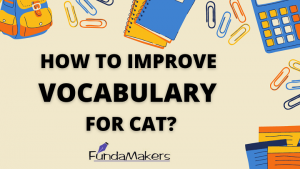